Our FoHS Rescue team has been busy over the festive season.

In the lead up to Christmas, a little seal pup got itself stuck down a hole in between large rocks at Waxham beach.  It probably would never have been discovered if it hadn’t been for an eagle-eyed member of the public who reported it to our emergency number.

It was not an easy job as rescuers Peter Ansell, Sally Butler and other helpers had to get a rope around it and that involved putting their hands down the hole while trying to avoid being bitten by the frightened and agitated pup.

As you can see from the video, their persistence paid off and the pup was pulled out and released shortly afterwards unharmed. 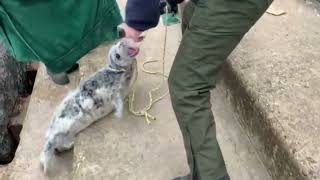