To protect the grey seal rookery at Horsey and Winterton from disturbance by the public.

To increase knowledge, understanding and appreciation of grey seals. To work with landowners, agencies and the local community to increase protection of the grey seal colony. To operate and manage an effective seal wardening scheme.

Our History Friends of Horsey Seals

Friends of Horsey Seals came into being when funding of the original project dried up in 2011. In 2003 Natural England had teamed up with the Broads Authority to give protection to a small group of Atlantic grey seals that had started to give birth on Horsey Beach.

Breeding success suffered from the lack of understanding that these shy creatures were easily spooked by the presence of humans. Local volunteers were recruited to ask visitors to keep their distance and the colony returned in greater numbers year on year.

Friends of Horsey seals has managed the project from 2012. Some of those early helpers, including Peter Ansell and Albert Ward, felt strongly that the work should continue. When asked, they agreed to take the project on. It was renamed Friends of Horsey Seals (FoHS). The number of births on Horsey beach had been steadily increasing each year and by that time had reached around 500 pups. 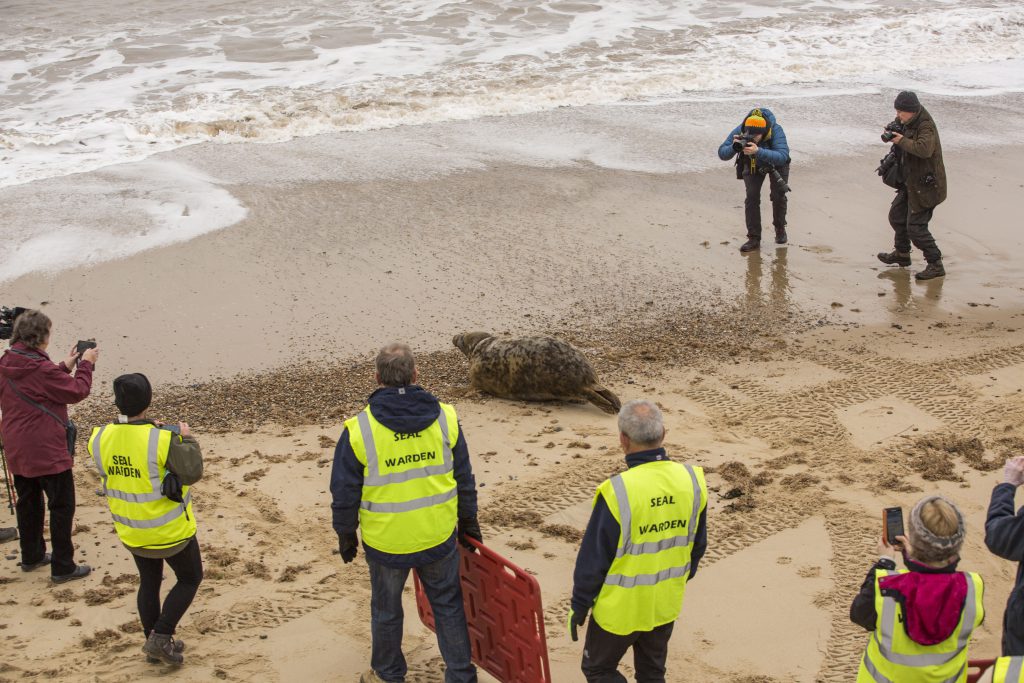 FoHS boosted the number of original volunteer wardens and introduced formal training for them. It proved a good decision. The growing number of pups being born each year at Horsey soon became something of a tourist attraction because the beach was so accessible.

The trained wardens made a real difference, not only to the safety of the seal colony but also by creating a positive experience for the people who came to see them. At the same time the FoHS seal rescue team officially came into being and was trained by the RSPCA. It still operates seven days a week, rescuing injured and distressed seals.

Since then, we have continued to expand in response to the growing size of the seal colony thanks to the generosity and involvement of the community and the volunteers who give up their free time to warden.

We could not operate without subscriptions from the Friends scheme and support from our donors and sponsors. Local businesses help us acquire equipment and other essential items, landowners give us access and additional help and we work alongside partner agencies.

The seal colony now extends from Waxham to Winterton. In the 2020/2021 season 2,500 births were recorded, breaking all previous records and the colony continues to grow.

The charity is managed entirely by volunteers. Meet the Trustees.

I was born in Wood Green, London in 1935 and evacuated during the war, first to Bournemouth, then to Lancashire (fortunately both times with relatives!!). I left school aged 17, took a short-term job with British Rail before joining the Army for National Service and spent 19 months in Libya. On returning to civvy street, I spent my working life as Transport Manager for three major national companies, retiring at 63. I ended up in Norfolk, where I became a volunteer Little Tern warden at Winterton, working with the RSPB and Natural England.  I then graduated to seals at Horsey through my connection with Natural England for the 2004/5 season, when there were less than 100 pups born! I have chaired FoHS since its formation ten years ago, and this year was privileged and proud to be awarded the BEM for services to Norfolk seal conservation. 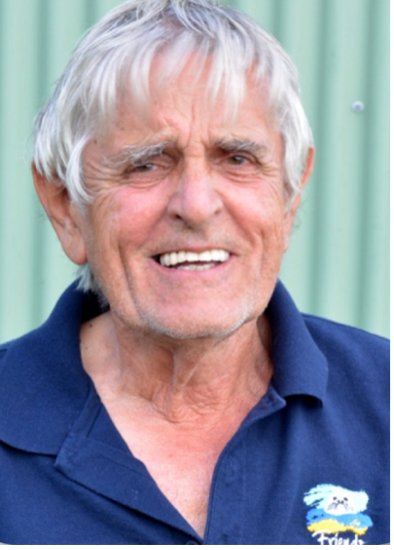 I was born in London and spent all my childhood and most of my life in Essex.  I joined the Metropolitan Police and spent 30 very happy years in East London in a very demanding, but varied and busy, working environment in both plain clothes and uniform. My wife Jacqui was also a police officer in the City of London. On retirement we decided to move to beautiful Norfolk. I have many interests which keep me busy, including being on the Norwich Cathedral ‘Events Committee’, a volunteer at the RSPCA Wildlife Hospital at East Winch (where our sick and injured seals are treated) and most importantly, Vice-Chairman of our wonderful ‘Friends of Horsey Seals’ which I have been involved with for over 10 years. I am also proud to be a member of our very successful seal rescue team. 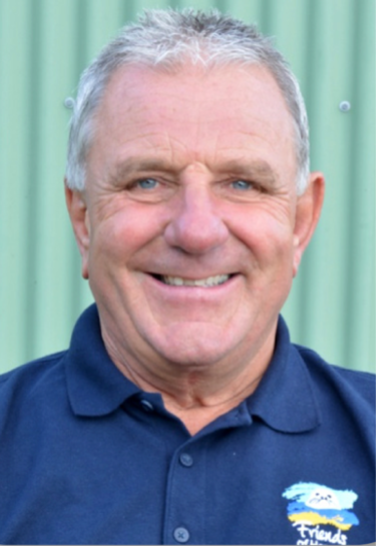 Born Birmingham 1941.  Moved to Norfolk in 1972 to help a friend in a local hotel and continued in hotel and restaurant work for several years until retraining in 1989 to join the Housing Department of Norwich City Council. For 10 years I worked seasonally as a retirement job with the Broads Authority in a Broads Information Centre, and then at their Norwich office.  The Broads Authority shared management of the Horsey Seals Project so that is how I became involved and signed up as a seal warden in 2006.  When Friends of Horsey Seals was set up in 2011. I agreed to take on the post of Secretary. 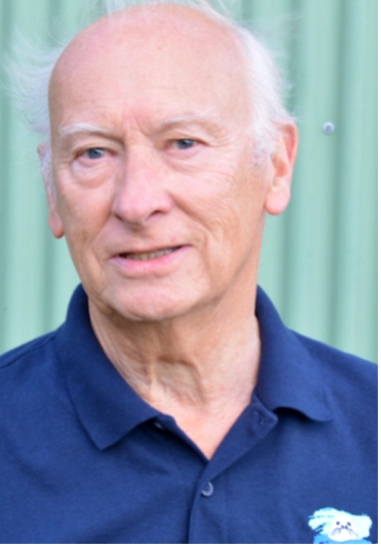 I have been a warden and self-proclaimed seal bore with FoHS for more than 6 years. A period volunteering with Oxfam as a bookkeeper led to a bookkeeping qualification and I have been the FoHS Treasurer for 4 years now. My working background has been quite varied, ranging from working on a ticket desk with British Airways to assessing for Social care with Norfolk County Council. Currently I work for Norfolk Wildlife Trust at their Head Office in Norwich. Things I love about wardening: the gorgeous pups who have more than their fair share of cuteness and talking to visitors who can’t believe the amazing wildlife spectacle before them. Things I hate about wardening: horizontal rain and people who don’t care about the wellbeing of the seals. 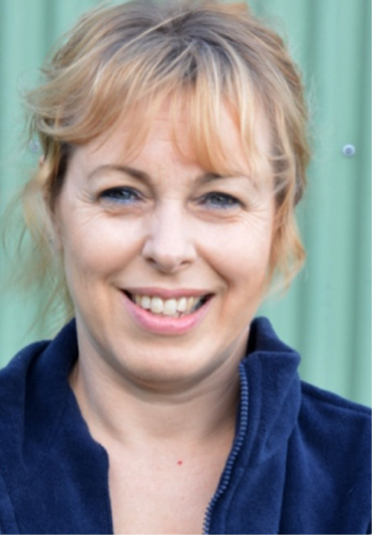 After night shift as a 19-year-old nurse, I’d walk to my local beach to swim with the harbour seals that often appeared. My nursing career meant I moved often. I was a Ward Sister on the Orkney islands, managing a new 30 bed ward for adults. I’ve always loved animals, spending spare time looking after our pigs, ducks, chickens and dogs (collies) at our Croft.  We had a colony of grey seals on the beach nearby.  When my Husband’s Coastguard station closed, we moved from Orkney to Norfolk. My local beach was Horsey and in 2000 there were only a few grey seals there. I became a seal warden and then a trustee on the committee.  I am now the FoHS fundraiser, educator and I mentor new wardens and look after our mobile information unit. I also administrate our newly installed exclusive Warden’s only rota and news feed site hosted by Three Rings. 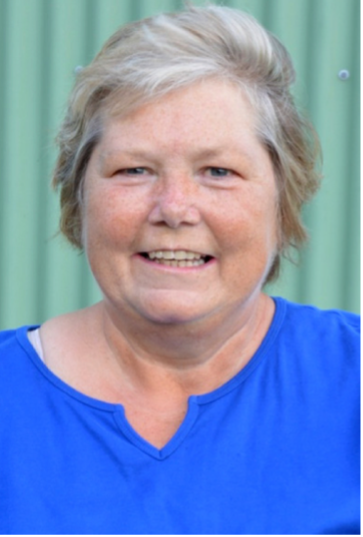 My background is in Social Work, mainly with adults. I worked for Suffolk and Norfolk social services for 35 years before retiring at the age of 60. I have been a volunteer with the FoHS for the past 6 years and love every moment. I undertake responsibility for a lot of practical jobs for the charity, including putting up fences and roping off viewing paths during the breeding season.  I am also an active member of the FoHS rescue team working with other team members to catch injured or unwell seals so they can be treated and hopefully returned to the wild. I keep records of the number of call outs we respond to.   All this keeps me busy throughout the year not just during the breeding season. 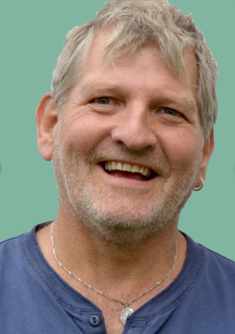 Born in Newcastle-on-Tyne.  After school I nursed, was a WRAF Officer for 7 years and co-owned a residential riding business on Dartmoor. I then trained as a journalist, writing articles for national magazines before landing a job on BBC Radio as a newsreader, war correspondent (1st Gulf war 1991) and program producer. I transferred to BBC TV as a reporter, news producer, and finally forward planning producer for BBC Look East. Retired after 25 years. My helicopter pilot husband got a job in Florida, where I worked for the Advanced Public Affairs Team of the American Red Cross, travelling to major disasters all over the US.  I also volunteered for a scheme protecting loggerhead turtles. In 2015 we returned to live in Norfolk, and shortly afterwards I became a seal warden which I love. 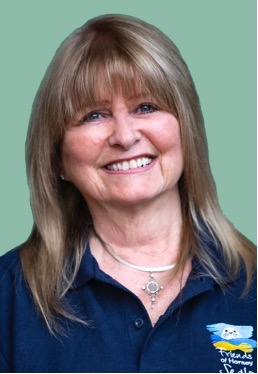 I was born in Spalding in Lincolnshire and from an early age I was involved with animals, helping out on a local farm and rearing abandoned lambs. I have worked in retail for 37 years mainly as a Bakery Manager and Regional trainer. I am a trained Rescue diver and have been lucky enough to have travelled around the world diving. I have always had a soft spot for Norfolk and have had many holidays here before deciding to bite the bullet and move here in 2019. I said for years that all I want to do is go to Norfolk and count seal’s and now that’s what I do and more. I am also a member of the FoHS rescue Team.  And I love it.! 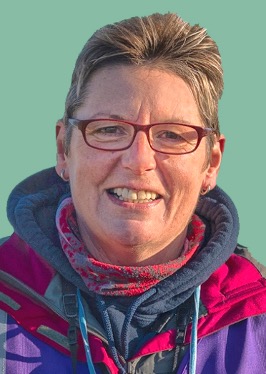 Our team of volunteer seal wardens give up their free time to help us protect the large colony of grey seals at Horsey and Winterton. In addition, they provide information and guidance to the thousands of visitors who come to see the seals during the pupping season between November and January.

Every warden receives detailed training before going on their first shift and we offer a mentoring scheme to help guide them when they start. Once qualified our wardens book their own shifts on-line to fit around their other commitments. Volunteering with Friends of Horsey Seals provides a unique opportunity to be involved in the preservation of the grey seal colony and to join a community of like-minded wardens.

To find out more email: recruitment@friendsofhorseyseals.co.uk or you can fill in an on-line application form. 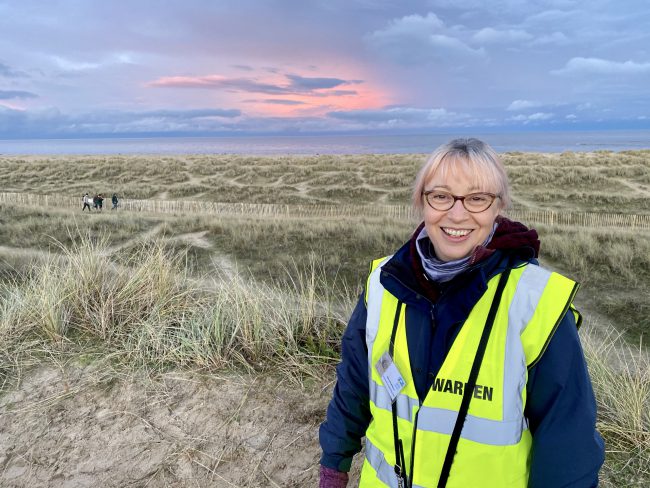