How Close is Too Close?

8 August 2021 – Friends of Horsey Seals is warning people about the danger of getting too close to seals on Horsey and Winterton beaches after being sent photos by a worried supporter of beachgoers getting dangerously close to groups of grey and common seals. The charity is particularly concerned for the safety of children, families and their dogs who can be seen standing and even sitting within a few feet of seals.

Grey seals come ashore at this time of year to rest, digest their food and groom their coats and this is normal behaviour. There are also a number of smaller common seals among them who are likely to be pregnant at this time of year or who have just given birth.  Sometimes their pups are left alone on the beach while their mothers take to the sea to feed.  If the mother is scared away by people surrounding her pup when she returns she is likely to abandon it, leaving it to starve to death.

Adult grey seals can weigh between 200 and 350 kilos and potentially they could knock over or crush anything (or anyone) in their path if threatened, frightened or cornered.  They are likely to either bite, inflicting a wound that will need immediate medical treatment with antibiotics or a whole group may suddenly bolt for the sea together if spooked.

Thankfully most people treat the seals with the respect they need but a minority have been putting themselves and the seals in danger by trying to stroke them or take selfies next to them and even chasing them into the sea.

Please remember these are wild animals and people should always stay at least 10 metres away from any seal. 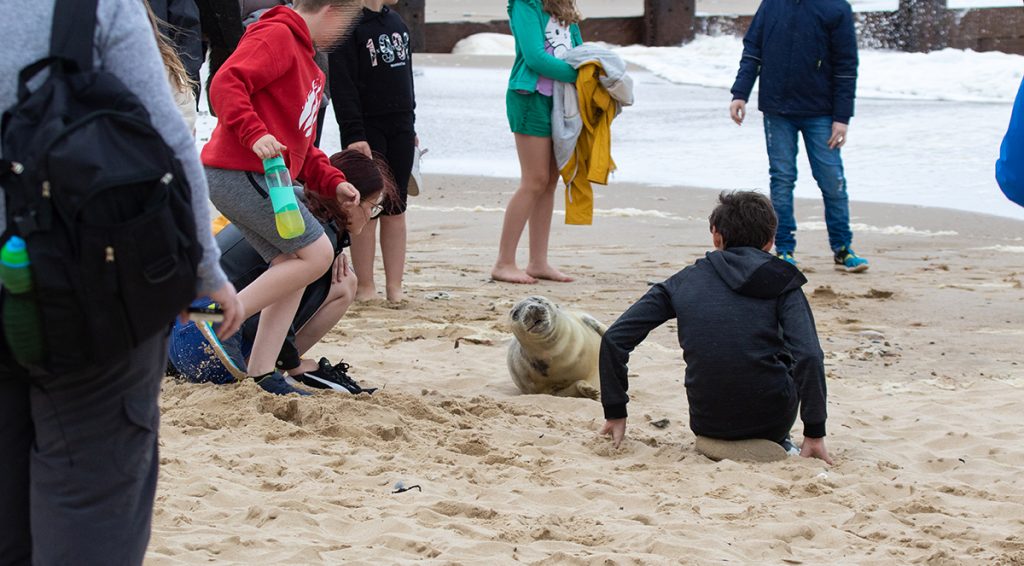