A grey seal with a white ring digging deeply into her neck, nicknamed Mrs Vicar, was finally caught by members of the Friends of Horsey Seals (FoHS) rescue team on Easter Monday after two and a half years of trying.

They rushed her to the RSPCA East Winch Wildlife Hospital, where Vets cut the ring off.  Her injuries were so severe that they initially doubted she would survive. After 3 months of dedicated and expert care which included medications and frequent salt baths, she is now outside in the RSPCA centre’s swan pool, where she is eating well and putting on weight. We put out a public appeal for 25 kilo bags of salt and pallets of mackerel to support the RSPCA’s efforts to save her life.

The response was overwhelming.

Well over 100 bags of salt were donated along with around £8000 for Mackerel. The nasty wound on her neck is healing nicely but the scarring will always be visible. Daily exercising, where she swims from one end of her pool to the other, has improved her neck movement almost back to normal. It is hoped she can be released back into the wild soon. 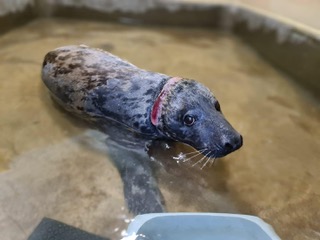