Once again, we must urgently appeal to dog owners to keep their pets on leads when near any seals.

This follows an incident this week on South Beach in Great Yarmouth near the power station, when a large dog off its lead terrorised a young and possibly ill seal on the beach.

The couple who reported it told us that the owners were able to call their dog off but when they returned, the dog, which was still off its lead, once again lunged and barked at the seal. Although the people who witnessed this event did not see the dog actually bite the seal, it would have caused the pup fear and distress, especially as it looks to be ill and undernourished. Regardless, there is clearly an increased risk of a seal suffering a dog bite when dogs are off the lead.

Please never force seals back into the sea and please, keep your dogs on leads whenever seals are around.

Please help and sign this government petition to introduce laws for the specific protection of seals against dog attacks as well as disturbance from both humans and their pets, making it unlawful to touch, feed, chase or worry a seal in England and Wales. Sign the petition here: https://petition.parliament.uk/petitions/584224 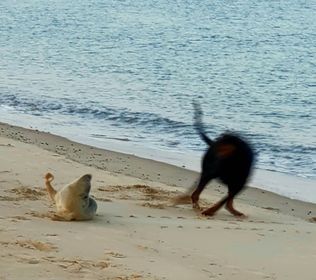