June and July is the pupping season for common seals. Unlike grey seals, which give birth on land, common seals, also known as harbour seals, mainly give birth at sea. FoHS Rescue team members came across a lone common seal pup at Waxham which was only days old with no Mother in sight. They monitored it for 24 hours until they were sure it had been abandoned, then picked it up and took it to the RSPCA East Winch wildlife centre near Fakenham. Another similar pup had been rescued by Sea Life near Hunstanton a few days earlier. The Waxham seal has been nicknamed Muffin and the other Cupcake. Both pups are now being fed with liquidised mackerel. 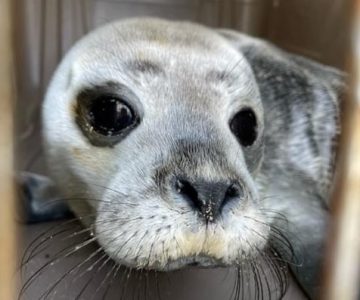